We're heading to Hay Farm this weekend for the Milfield Heavy Horse Association's "Looking Back" Traditional Old Skills Fayre. We'll be doing demonstrations of leatherwork over the 2 days, we have some have-a-go pieces for the children (young and old) to try we'll also be manning a stall loaded with our usual array of leather and horn goods.
So if you fancy a day out this weekend to see some traditional skills - spinning, blacksmithing, leather working or heavy horse teams - come along and say hello!
See you in the Autumn sunshine (hopefully!!)

Well the last month or so has been rather awesome... and a little chronologically confusing. Here at Wyld Fire we are used to jumping between the past and present, but this month we've also been visiting the future. 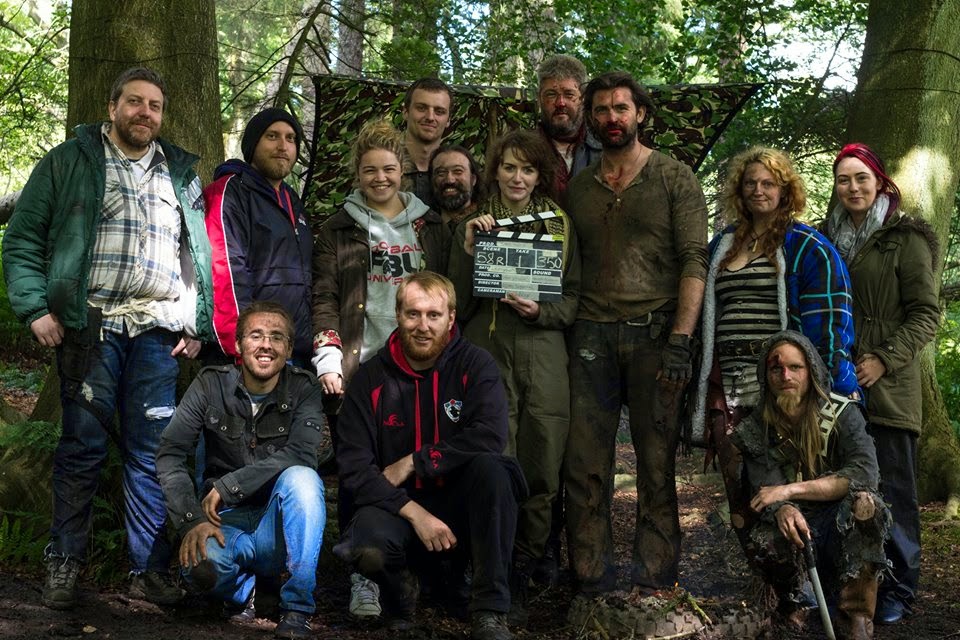 We had the pleasure of working on a fantastic film project, "The Young Ones - Safe Haven", a long running project of TACHY Studios. We had great fun doing this and because it's set in the near future, it meant we could let our imaginations fly when it came to creating costumes. As you can see from the photo we spent some time in front of the camera, as well as doing behind the scenes costuming work. It's a brilliant project and a fascinating story. I'd highly recommend keeping a close eye on their facebook page to watch for developments. 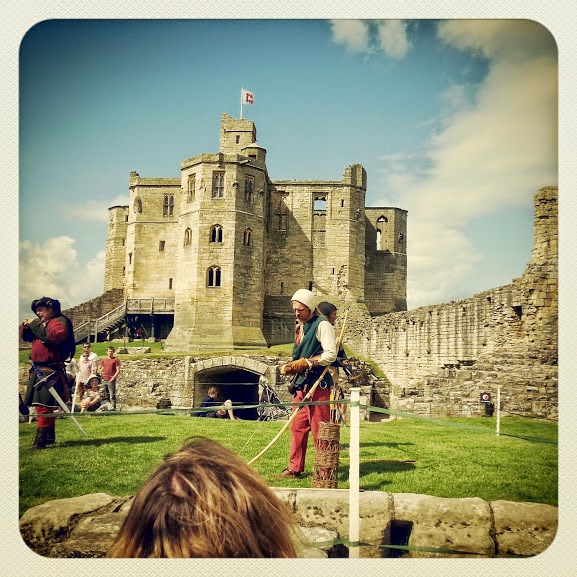 Once we were back in the present it wasn't long before Gordon was stepping into the past at Warkworth Castle. He's there as part of their summer holiday activities every Tuesday and Wednesday, helping to provide displays entertaining and educating people about the War of the Roses. The castle itself is spectacular and is a great way to keep kids busy through the Summer.

Now, I must bid you farewell for now as we are hectically getting stock ready for Pagan Pride and PF London conference. If you're local to these events we hope to see you there. We will have our usual array of historical crafts, and you can be entertained by some of Gordons storytelling.

Well the bank holiday weekend certainly lived up to British expectations weather wise. We had everything from howling wind, torrential rain and hail to bright sunshine and blue skies.
Not that the weather put folk off from coming down to Folklore, Legend and Myth weekend to browse the fine stalls, sample the best mead in the UK and generally enjoy the atmosphere on the recreation anglo-saxon farm in Jarrow. As well as the stalls there was a wondering troop of storytellers, the superbly talented "Moss Troopers" who kept the crowds entertained during the day and kept the living history teams spirits up during the long damp nights.
Wyld Fire not only had a trade stall, selling our usual fayre of horn and leather work, we also made our debut as a "proper" combat display group in our own right. Much fun was had swinging swords and slamming shields into each other. We were delighted to be told it looked "really real, you know"and to be asked by several of our spectators if we would we be able to train them! More on that to follow over the next month or so, hopefully.
Here are a few pictures from the weekend to whet your appetites for the next events we're at - 1000 years of traditional crafts in Lincoln (no fighting here sadly!) and then Viking Saturday (fighting here!!) with the brilliant bunch that are Viking Chester!


The stall in the glorious sunshine on Monday:

Shields and swords, ready for action:

A hastily formed defence by Gordon and Monty to see off the danger of Jez, the spearman:

But he got wise to their tactics in round two and set out to divide and conquer - rather effectively:

Some cutting drills with Mark and Gordon, the key to success with a sword is lots of practice!

And a bit of man-on-man combat. Close fast and go for the kill!!

If all else fails a good old fashioned wrestle will see off your foe!

Thanks to Monty, Mark and Jez for joining Gordon for the combat.
All pictures are provided by the superb Foto Couture.

May Is A Come In!

Beltane blessings to one and all! The Winter has passed, Spring has sprung forth green and bright and now Summer chases hard at it's heels!
We're just back into the workshop after a hectic run up to May. Lily and I got married (well hand-fasted but we don't think there's any difference!) and we've been dashing all over the country for trade events and camps.
We were in attendance at the Hexham Spring Fayre doing some living history pieces and then traveled south to Thornborough Henge to celebrate Beltane with some superb folk. Tales were told, horns found good homes and great foaming tankards of mead and ale were raised in revelry and rejoicing.
There will be pictures aplenty as soon as we get them all transferred and uploaded.
We've got a good number of commissions to be cracking on with as well as sorting all our "stock" items - don't worry we'll be showing you pictures of them as soon as we can!

So now it's all go to get set for Folklore, Myth and Legend at Bede's World at the end of the month.

Keep your eyes peeled for pictures and videos.
Until then, Summer's coming...what are you waiting for get out there and re-connect with the woods!

GREMLINS and an apology.

Some bad news from our online servers!!
We've had some gremlins run rampant through our online filing cabinets - they've pulled out and chewed some of the more important wires connecting said cabinet to our emails.
SO...
If you've been trying to get in touch with us via our contact form, or the online order form over the last 2 months we can't apologise enough for the lack of reply.
We had absolutely no idea anything was amiss until two months worth of queries and updates landed, with a metaphorical thump, in my inbox this morning. Whatever the issue was, it seems to have been fixed/updated/technomanced back to a functioning state.
We are, as we speak, wading through the forms and trying to reply to everyone as fast as we can - 2 months is a long time to hear nothing from a query!

Please rest assured the gremlins have been herded back into their usual spot in the workshop and they are working hard to produce all the items you lovely folk have requested.

With the coming of spring we're extremely busy in the workshop getting set for all the upcoming camps. We're still waiting for the "all good" to start courses in the woods and we're hoping to be running courses from the workshop again by the end of June.

In other news, more regular blog updates will be coming your way as we have a reliable net connection again! So keep your eyes on the site for some introductory skills videos and so on!

Best wishes and warm sun on your face,